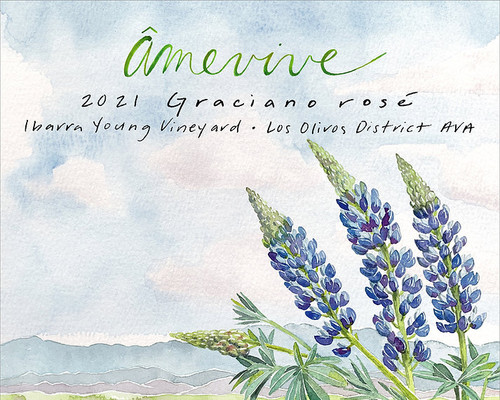 This wine comes from a small block at Ibarra-Young planted in the late 90’s. This block has been farmed organically since inception, and what's growing on the understory throughout the year is proof. This block is covered in native purple lupine in the springtime, and transitions to the later blooming native Spanish lotus in the early summer. The floor is consistently covered in dainty pink and purple flowers for the majority of the growing season. We don’t sow these seeds, they are native to the Santa Ynez watershed and are what have been growing on this land since the Chumash inhabited the area. The lupine and native lotus have made a striking comeback since the vineyard’s no till transition in Spring of 2019.

Of all the grapes we tend at Ibarra-Young, Graciano tends to have the most acidity, thus it was destined to become rosé. This block was picked on a cold morning with the help of some friends with big smiles.

These grapes were brought into the cellar around 20.5B and were foot stomped to macerate on their skins. After 24 hours of skin maceration, the grapes were put in the press and squeezed lightly. The juice settled for one night and was racked partly to neutral French oak and partly to stainless steel drums for fermentation with native yeast. The rosé rested on its fermentation lees throughout elevage and was bottled unfined and unfiltered in March of 2022.

Bright, red, fresh, juicy. Not your provincial style rose! She is textured, herbal, and layered in all the best ways. Think buckets of raspberries freshly picked at the dawn of a hot day.  Everything a rose should be with a little kiss of tannin from Graciano’s thick skins. Enjoy chilled just about anywhere at any time!

Art: The purple lupine on the front is painted by my thoughtful mother, Eileen Anderson. These lupine are native to the field where this block was planted and have been here since the Chumash inhabited the land. They are native nitrogen fixers and food for pollinators making them a really important species at Ibarra-Young. The little lamb on the back was born in the Graciano in spring of 2020. I named her Charlotte after the woman who first tended this land, Charlotte Young.

Lady of the Sunshine